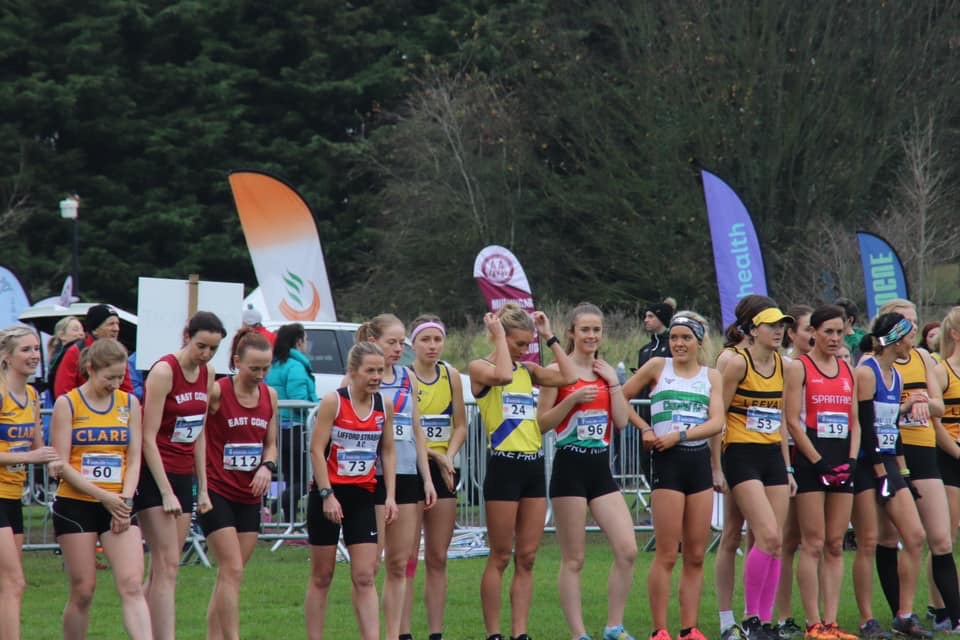 On a pleasantly calm and mild Sunday afternoon in North Dublin, the cream of national talent gathered in conditions that were best described as sticky underfoot, but otherwise agreeable for the Irish cross country championships in Abbotstown. North Down Ac was represented across a variety of age groups on the day, with many fine performances, but the undoubted stars of the show were the senior ladies, who stormed to a historic silver in the team competition, leaving a variety of illustrious opponents in their wake. Club President Brain Smith commented – “What a brilliant performance by our senior ladies team, only 9 points behind the winners Leevale and ahead of several teams who have dominated the record books down the years.”

With four to score and the minimum number of team members turning out, the North Down ladies knew there was no margin for error and responded magnificently, each one of them making a vital contribution to a proud memory for themselves and their club. The quartet was led home by two ladies who continue to push the boundaries of what was previously possible, Jessica Craig in 10th with Rachel Gibson 15th,  Katie Moore celebrated her call up the Ulster squad for the upcoming Celtic Cross Country in Stirling with a typically committed performance and 31st place, while Roberta Dornan recently represented Great Britain & NI at the European Master Athletics in Italy and showed championship mentality to dig in, claim 73rd and secure the silver on one of the more significant days in the history of North Down AC.

Whilst the top level of the club appears to be in good order, the future would appear to be bright at the younger end of the North Down production line as well, with both the Under 12 boys and girls teams qualifying to represent club and county in Abbotstown. 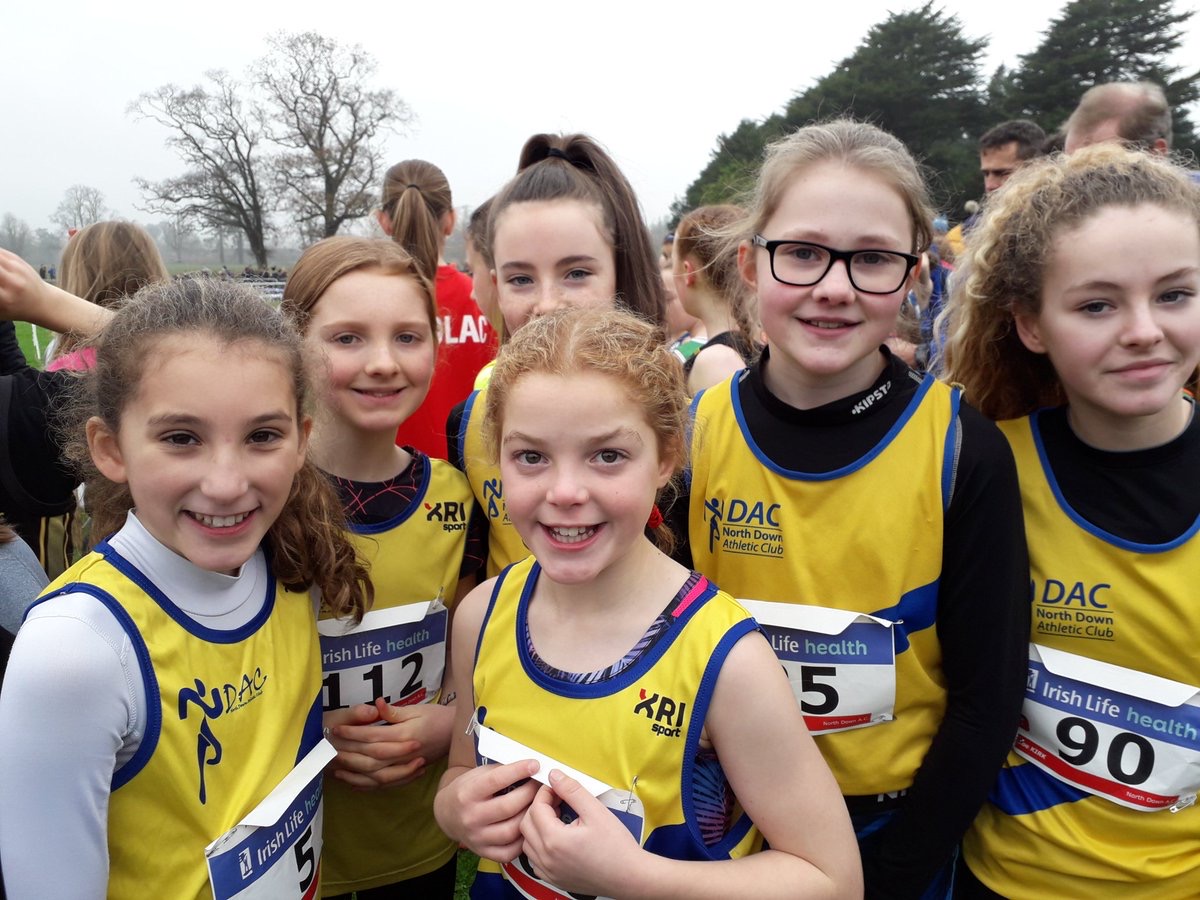 On a weekend when several were sitting their second AQE exam, the commitment to their sport shown by the young athletes was tremendous to witness, not least by Lauren Cheatley who led the North Down girls home in 87th, with Holly Blease not far behind in 99th. Erin Playfair finished in a commendable 107th, having hotfooted it across from the Irish Aquatics Centre, where she had won bronze in the national diving championships only minutes earlier! while Cara McCurley, Zoe Kirk and Eimear Mulligan made up a fine team effort, 16th overall. 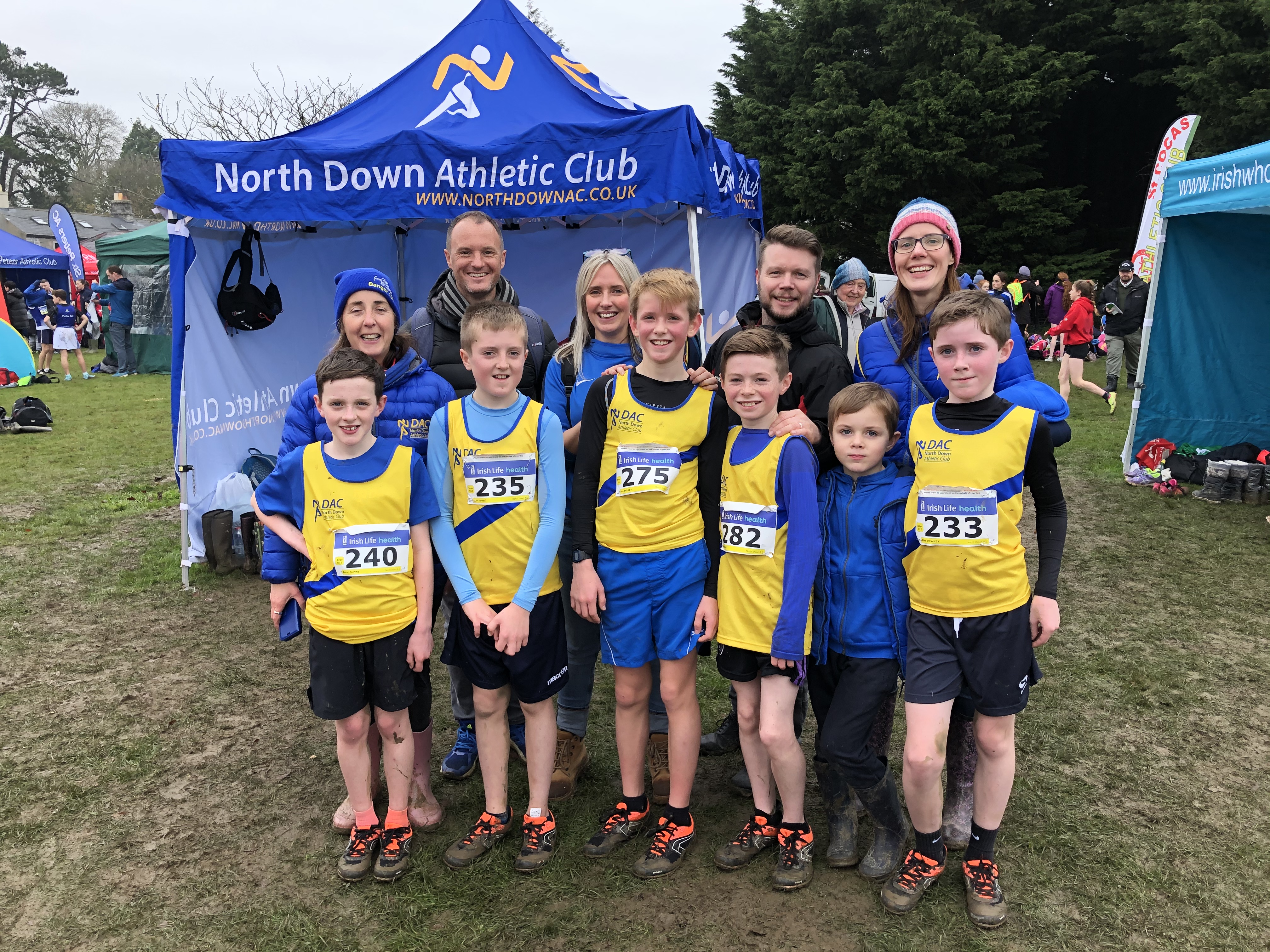 The Under 12 boys, for whom Seb Holley (37th) and Aodhan Keag (59th) were also representing Ulster, finished a creditable 9th nationally (1st Ulster team) with excellent performances by Isaac Dunne, Alex Downey and in particular by Sam Doyle, who ran his heart out for the team despite feeling unwell. 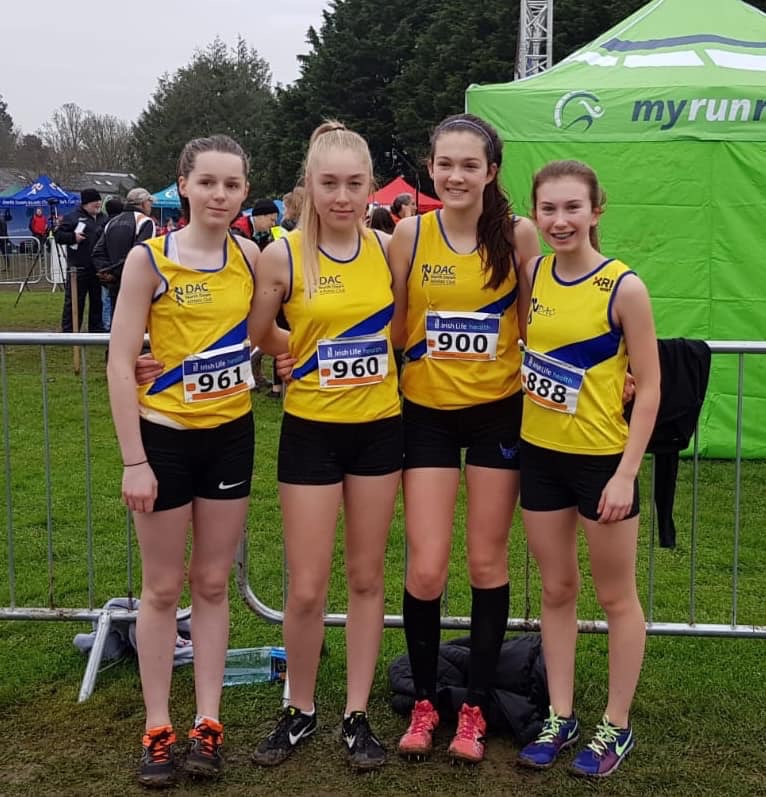 The club was represented at under 14 level by Ella Riddell and Oliver Playfair, both of whom finished well up their respective fields, while the Under 16 girls were 12th in the national championship, Tara McDonough (35th) leading the team home and receiving excellent support from Tori Galloway, Hollie Massey and Amy McMullan. Murphy Miller (33rd) was the first of the under 18’s across the line, followed by Amelia Tyler (46th), Caitlyn Turner (55th) and a well packed group of Rachel Gillespie, Amy Ellison, Alisha Turner and Bryanna Catney, with the team 8th overall, while the junior men were 12th, Thomas Patterson (49th) the best of the bunch, followed by Jack Logan, Mark Carberry, Cameron Jenkins and Ben Jenkins. 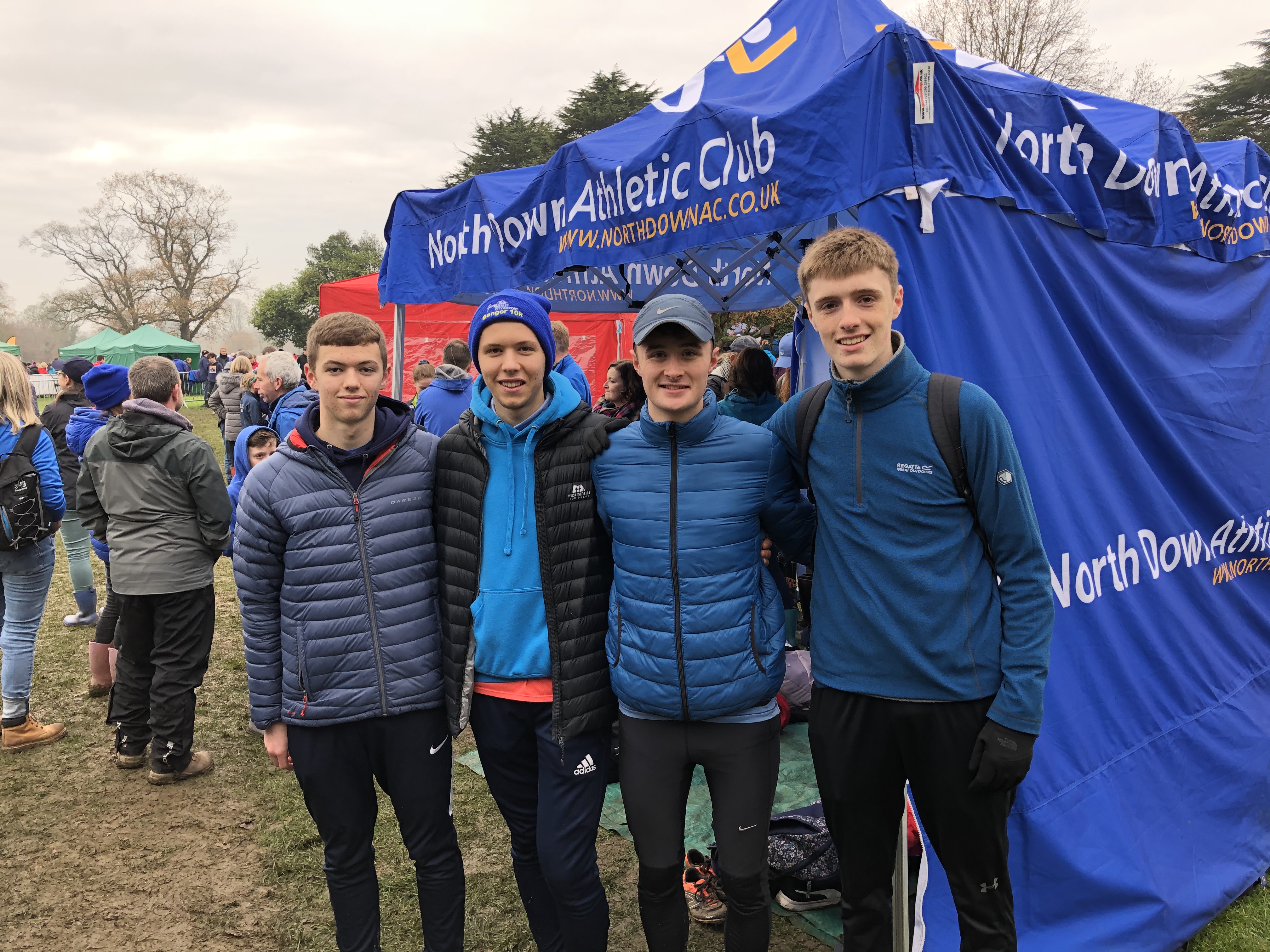 Craig McMeechan has fond memories of the junior mens race, having taken the title back in 2017, but on this occasion he led the North Down men in the senior 10k event, finishing 48th overall and 6th in the U23 category, in a return to form that will have had him in the selection debate for the upcoming European Cross Country in Lisbon on December 8th. 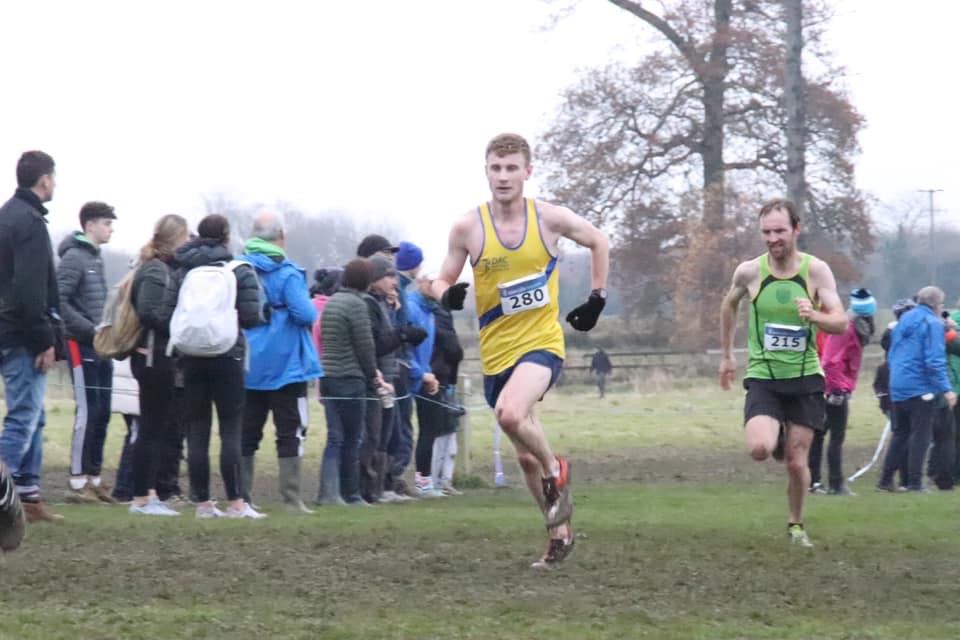 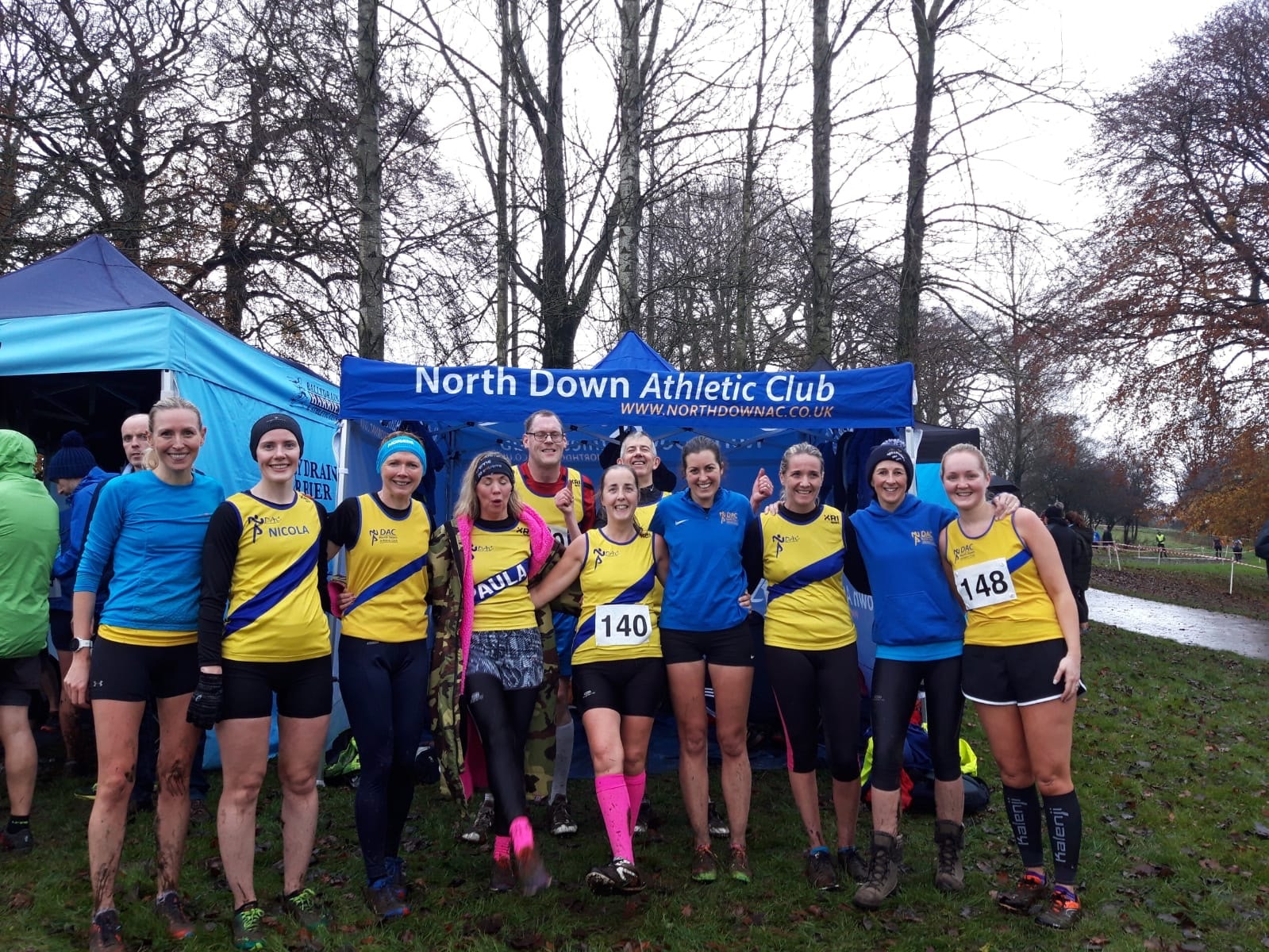 The latest round of the cross country league saw a return to the Sixmilewater Park in Ballyclare, with overnight rain leaving the ground sodden and a course that deteriorated from ‘sticky’ to ‘mud bath’ as the day progressed. With many of the club’s top athletes keeping their powder dry for the national championships on Sunday, credit must go to the club captains for ensuring a decent turnout, especially on an AQE weekend, but before the seniors got underway the club was represented by two young athletes in the U13 mixed race, Daniel Caldwell finishing 16th in the 1 mile event in 6:34 and Eva Gibson 4th girl in 6.47. 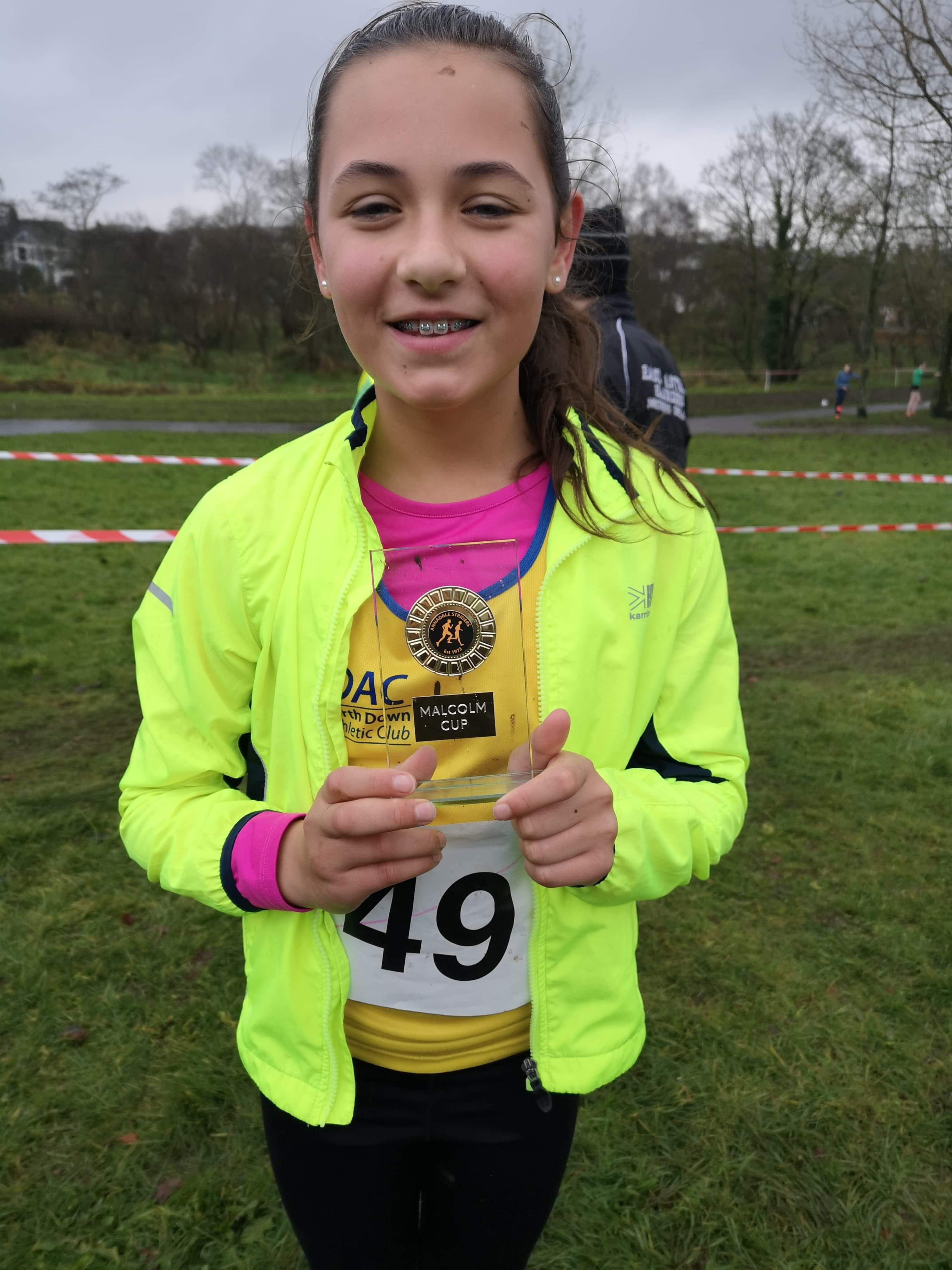 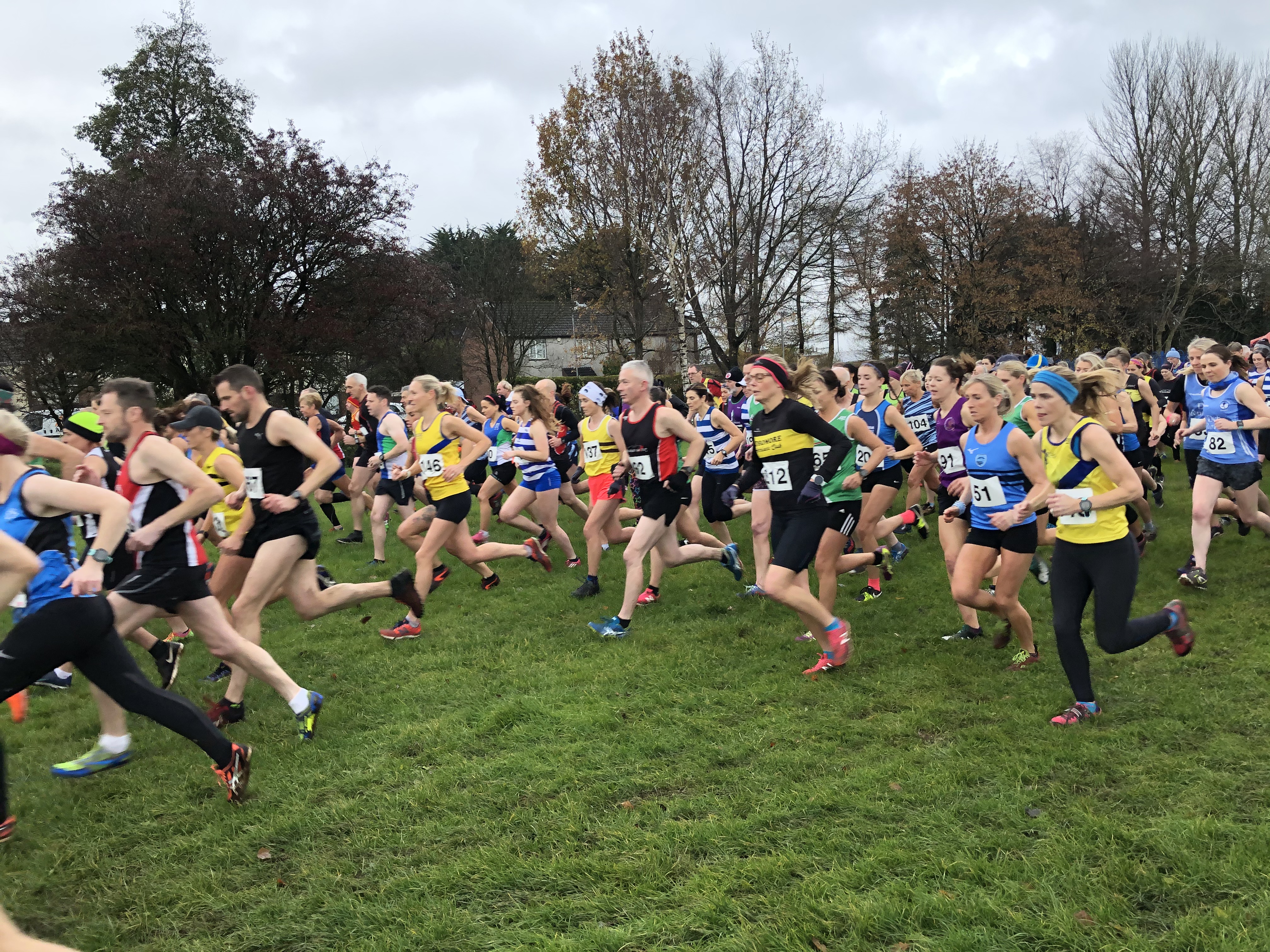 Pamela Phillips, Nicola Downey and Louise Watson all contributed a vital point, as did Paula Simpson, Hannah Dunne and Nicola Stevenson, while James Barr was well up the field and took the scalp of the recently crowned EAMS Fatlad Half Marathon champion, Pat O’Driscoll. 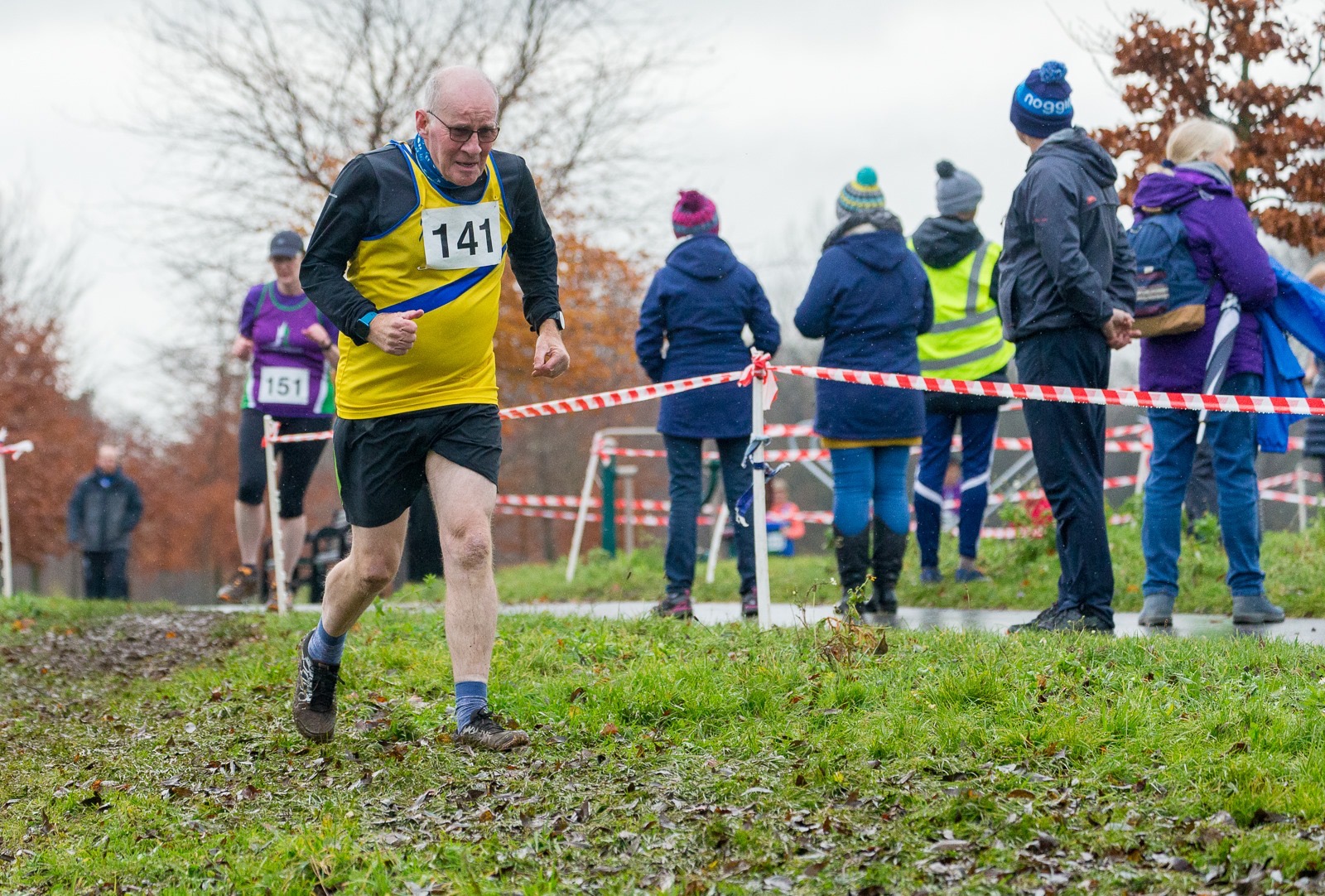 In the senior mens event, set over four laps of approximately one mile, the club was led home by Mark Weir (42nd) who showed no ill effects from last weekends Tollymore Ultra to glide over the ever increasing mud. Chris Downey (50th) was next, closely followed by David Massey (55th), while Colin Walker (78th) demonstrated that his talents are not limited to coaching, thundering across the line to claim the all important fourth to score team place. 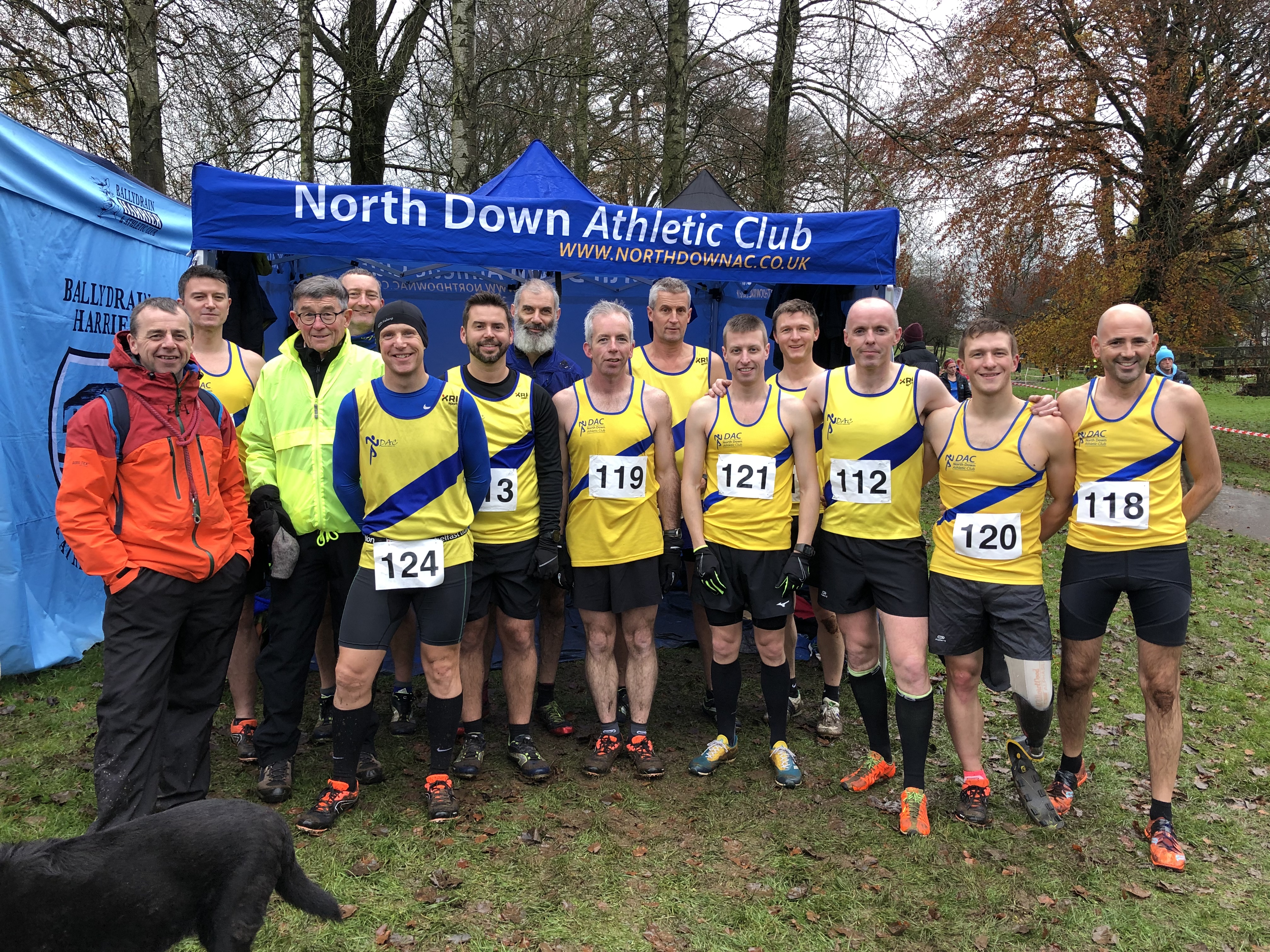 Michael Taylor was next across the line, with Richard Garrad picking up a couple of places in the home straight to finish not far behind, while Jamie Stevenson and Ian McCreary completed club representation on a day when every member of the team contributed a vital point. Boasting a flat and fast route in pleasant weather conditions, the Benidorm 10k delivered on the sunshine, but threw up a few alterations on the route requiring a couple of extra hills and an energy sapping  beach section, but still seemed to be to Cliff McCausland’s liking, the North Down man of perpetual motion claiming his most recent race medal in 49:10 for 210th place out of the 836 starters. 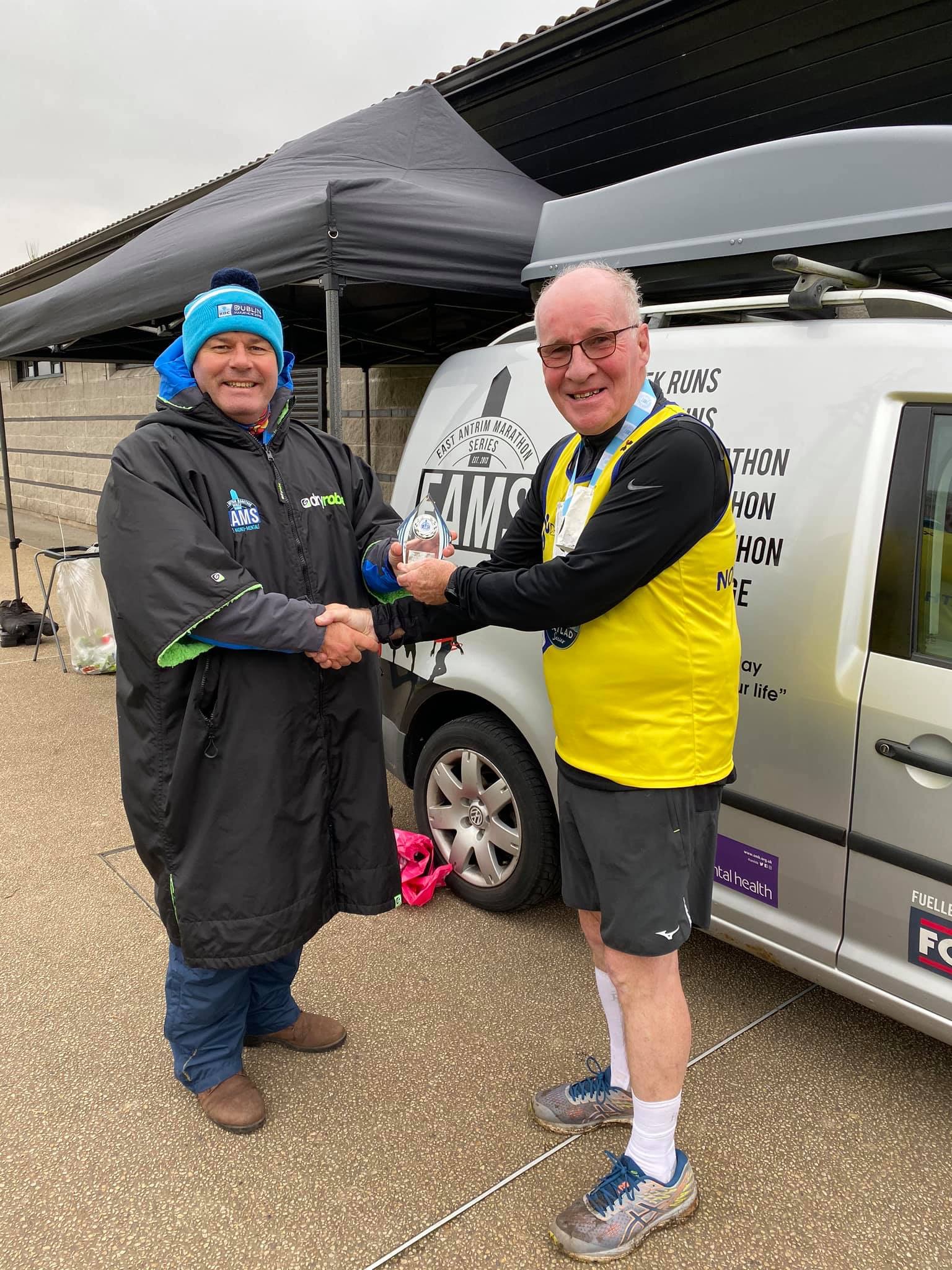 As per usual, the folks at the East Antrim Marathon Series offered a variety of distances to accommodate the needs of all participants, with their most recent event last Thursday consisting of multiple loops within the V36 playpark in Carrickfergus. In what Pat O’Driscoll described as a ‘tactical race’ the North Down legend completed 9 laps of the course, with a few pit stops to discard clothing and sign a card for someone completing their 700th marathon at the event! In the end Pat clocked up his 118th half marathon in 3:02:09 and was delighted to discover that while the majority of participants had signed up for the marathon distance, he was the first man across the line in the half, giving him the honour of a podium finish for the first time in his illustrious career. 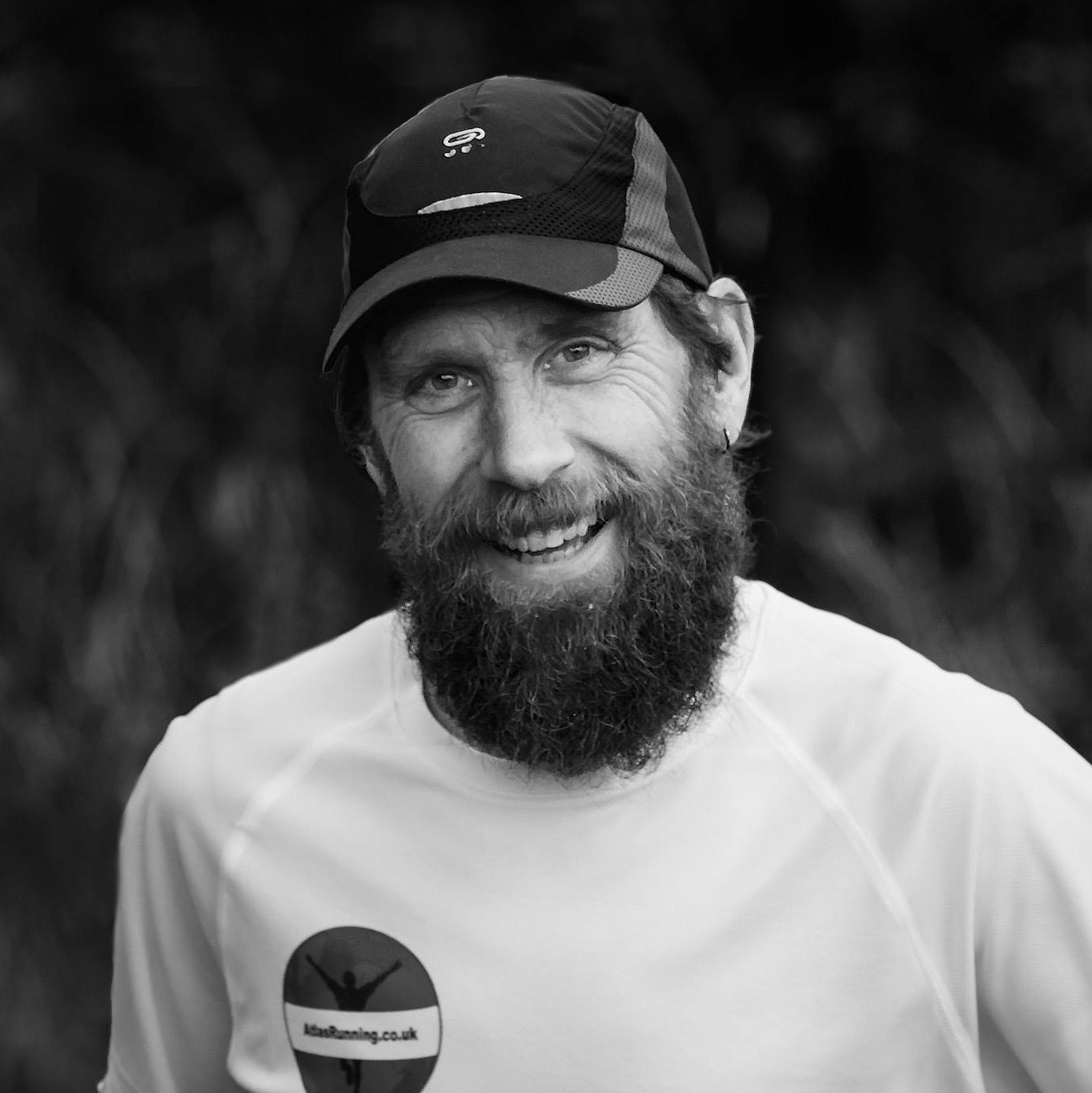 Three North Down members have been selected for the Ulster team to compete at the prestigious Celtic Cross Country, hosted in Stirling on January 11th 2020. Craig McMeechan will represent the U23’s, while Jessica Craig and Katie Moore have both been selected for the ladies senior team. Sean Nickell and Peter Swann will also represent Ulster, both men being selected to compete for their province in the Anglo Celt Plate, a 100k ultra endurance event scheduled for 16th May next year in the English village of Bodddington. Congratulations to all on their success.

Air Ambulance ‘Run in the Park’ 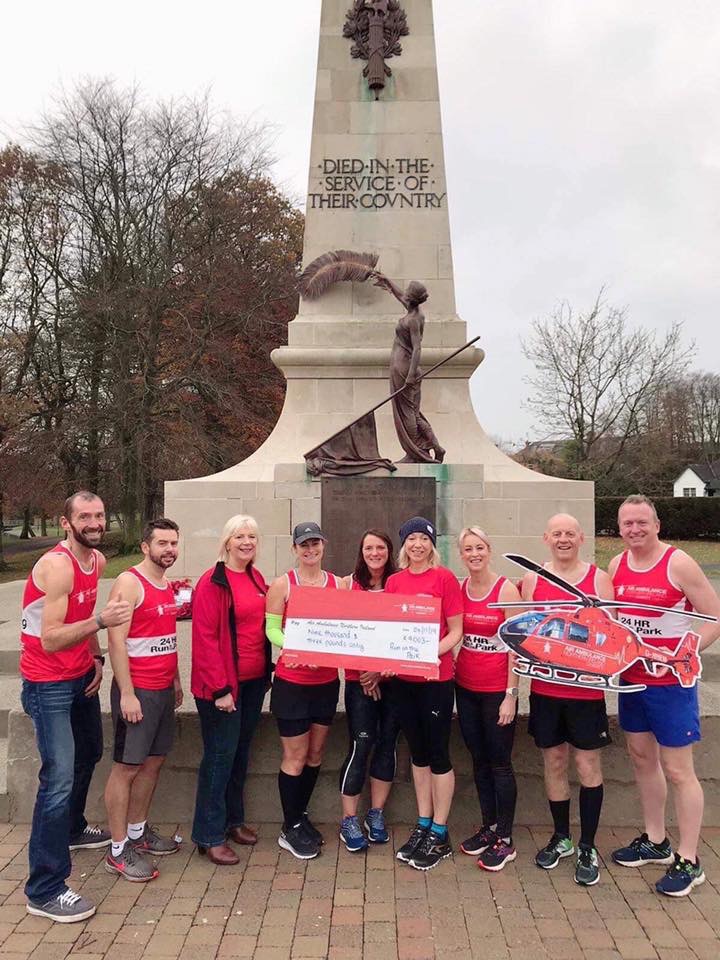 After successfully completing their 24 hour relay event around Ward Park back in September, the core team from ‘Run in the Park’ were back on familiar turf for the official handover of the proceeds from their epic adventure to the Air Ambulance charity this week. North Down AC was represented by Richard Garrad, Heather Matchett, Caroline Crothers, Melanie Patton, Mitchell Brown and Gordon Matchett as the announcement was made that the event had nearly doubled its original fundraising target of £5500, to finish with an outstanding final total of £9000, well done to all involved.